translation is
a crossing over. an exchange. a removal. an addition. a destruction. a replacement. a building. a violation. a transformation. an in-between. a movement. a book. an EM DASH.

This, and the magazine as a whole, is the exemplary work of AHB’s managing editor Sarah Viren.

In its first issue, there is poetry by Taejoon Moon, translated by Christopher Merrill and Won-Chung Kim, a Q&A with AHB’s senior editor (me), and an excerpted essay from Children of the Monsoon, by David Jimenez, translated by Andrea Rosenberg. Jimenez is the Asia Bureau Chief for the Spanish newspaper El Mundo and has been reporting from Asia for nearly twenty years. His book is a compilation of essays on young people from Afghanistan, Mongolia, the Philippines, North Korea, China, Indonesia, and more. It is a terribly good book.

The piece Sarah has chosen for Em Dash‘s first issue is called “Vothy,” which is the name of a delightful little Cambodian girl with AIDS. Her mother is with her in the hospital. She is sick, too. Here is an excerpt: 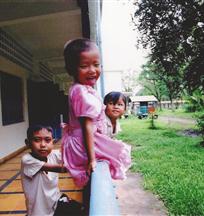 “Sokgan has never understood how that scrawny, feeble man who promised her a new life in the city could have the strength after an arduous workday to pedal another eleven kilometers to the brothels of Svay Pak, on the outskirts of the city, to spend his day’s earnings there. But it’s too late now for regrets. She is lying naked, too weak to feign modesty about the body she no longer recognizes as her own, in a room on the third floor of the Russian hospital in Phnom Penh.”

The essay and the whole first issue of Em Dash is available here: (scroll down to “from the magazine”). The book comes out next month.