I’m giving a couple of pre-concert talks for the Indianapolis Symphony, which is performing Shostakovich’s 7th Symphony, “Leningrad” on Friday, February 6 (and then again on the 7th in Carmel), under the direction of Krzysztof Urbański. It is such a perfect case of the changing fortunes of a musical work against the backdrop of world events. Here’s a little taste of what I’ll be saying.

I’ve been asked to discuss the context of Shostakovich’s 7th Symphony, the Leningrad Symphony, and in order to do that I would like to first ask you to imagine a situation, let’s call it a performance scenario.

We are used to being asked to silence our phones and mobile devices at live performances. Some people have very loud ring tones and beeps and dings that can be quite distracting when you’re trying to listen. Imagine a situation where it’s not someone’s phone that’s distracting you but a ring of artillery surrounding the city blasting away from seven miles out, not to mention your own artillery firing back from just down the street. And let’s add to this picture a company of half-starved musicians on the stage, not the usual philharmonic orchestra—because they were evacuated to Siberia months ago, along with their conductor. What was left was the Radio orchestra, not a bad group, but then they’ve been in the city under siege for nearly a year. Half of them have died of disease and starvation. To find more players you’ve had to go out to the troops protecting the city, find former members of regimental bands, jazz bands, anyone who can play. The score was airlifted in on a medical transport in July, and when the conductor saw it, his first response was, “We’ll never play this.” Many of the musicians were too weak to blow their instruments when rehearsals started. Sometimes they would collapse on stage during rehearsal. They would only ever manage to play the entire work once before the performance, at the dress rehearsal. The musicians just didn’t have the strength to get through the whole thing.

We can add more detail. The German forces bombarding the city did not do so indiscriminately. For hours every day, their guns range across the city, looking for crowds, people lining up at bus or tram stops, ticket windows, crossroads, factory gates when the shifts changed, entrances to theaters and musical events, just like the one being planned, the one they’d been ordered to carry out, whatever it took. And so an hour before the concert is due to begin, the city’s defenders begin laying down a ferocious barrage of artillery aimed at the enemy guns, forcing the German soldiers to take shelter. Just before the concert starts, they stop firing and are quiet. No German shells land in the center of the city for the next hour and twenty minutes, just enough for the concert to take place. It was, what Brian Morton in a 2006 book would later claim, “probably the only time in musical history that military operations were coordinated to assist an orchestral concert.” 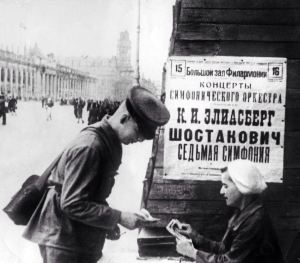 This scenario, however, like the photograph of the soldier buying a ticket to the performance that night, is not the whole story of the work, though it’s a very powerful one. It helps to explain why the symphony immediately became wildly popular and frequently performed all over the world, and there’s much more that can be said about this world-wide reception in the midst of WWII, and I will say more, but this is too simple a representation, too easy a way of making sense of the work’s provenance and lasting importance. It’s not complete.

Thinking of the work as something of a historical document in this manner, a representation of “the siege of Leningrad,” let’s say, makes it into something one-dimensional and maybe not even that artistic. It reminds me of the way Aleksei Karenin, Anna Karenina’s big-eared husband in Tolstoy’s famous book, approaches art. He doesn’t know anything about it and has no feeling for it, so he reads books about it in order to be able to express his opinions. We reduce the music when we categorize its meaning based on the events it supposedly depicted, and supposedly is a good word to remember.

Right, just couldn’t help the Tolstoy reference. These are in my head for the duration, I’m afraid, the fruit of reading and teaching those works so many times. Today I listened to Bernstein’s recording of the 7th with the Chicago Symphony, turning off the heat in the house just to try for a bit more atmosphere. God, what a big, bombastic and yet ambivalent work.